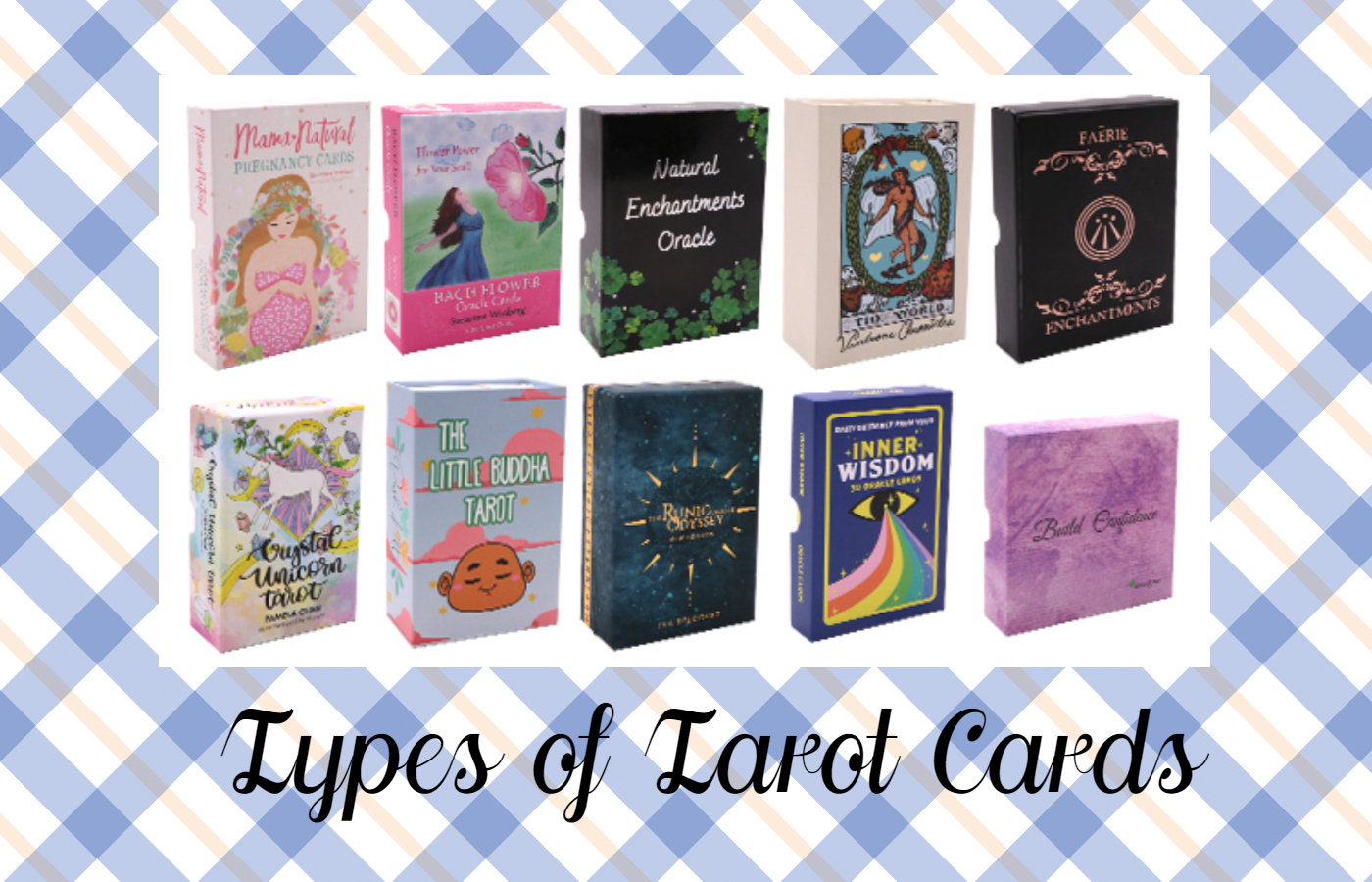 When it comes to dealing with types of tarot cards, their origin is undoubtedly associated with many distinct arguments and stories. While some people believe that tarot cards first came into use in Italy somewhere in the 15th century, others emphasize that they originated during the medieval tenure in Western Europe. Some people also presume that the origin of tarot cards is somehow related to ancient Europe.

Whatsoever, there is no refuting the fact that most tarot cards that we use today come directly from Italy. With that said, do you know what the most interesting thing about tarot cards is? They still possess the exact same interpretation and meaning, irrespective of the never-ending arguments and stories that are circulating about their origin.

Nowadays, psychic readers make the best use of tarot cards. In this article, we will shed some light on the numerous distinct types of tarot cards that are currently available, including the ones that are worth getting your hands on!

Introduction to Tarot Cards: What Are They?

Tarot cards are primarily used as a divination tool, and although these cards were not designed for divinatory purposes when they were first created, various mystics and psychics began using them when they adopted the practice of spiritual identification and growth.

Each tarot card has its own unique story that focuses on a different interpretation, depending on the placement of the cards, whether they are face-up or reverse-facing, or what the nature of the spread is. These details play a key role in tarot card interpretations.

The Major Arcana indicates the soul and life lessons that one must adhere to during one’s lifetime. On the other hand, the Minor Arcana cards enlighten our daily life experiences and the challenges that we must deal with. In addition to this, the 16 court cards in each deck show the personality traits of a person.

All suits of the Tarot indicate each of the four elements. In contrast, the Major Arcana is considered to be the embodiment of the fifth element, which spiritually connects people to their grand consciousness.

Although there is a wide variety of tarot cards available in the current era, below, we have mentioned some of the basic and widely-recognized types.

If you are a tarot enthusiast or a beginner, it is recommended to use some of the more “classical” tarot cards. The use of classic, orthodox tarot cards can make it very convenient for the novice to quickly master tarot reading.

The Tarot cards we generally see are derived from the Rider-Waite Tarot. It originates from the occult theory of the Golden Dawn, a British occult association, and combines some elements from astrology and magic to extend and develop a card system that is very suitable for beginners. It can help us understand the whole Western occult system and the worldview of the spiritual world from another dimension.

The main reasons for its popularity:

Up to now, there are at least thousands of Tarot cards designed under the influence of the Waite system, and more than 70% of the English Tarot books are written with it as the model. Therefore, if you want to choose an international standard set of tarot cards from many, the first choice is definitely the Rider-Waite tarot.

The Thoth Tarot was created by the controversial occultist Aleister Crowley in collaboration with Frieda Harris over a period of five years (1938-1943), combining various occult elements such as astrology, Kabbalah, I Ching, mythology, alchemy and magic. This deck is based on the Egyptian theme.

Its painting style is unique and abstract in beauty, and the depth of content is beyond most of the previous tarot cards. According to experience, most people who have used this deck believe that the spiritual function of this card is greater than the divination function, so the Thoth deck is the most respected among people who use tarot cards for spiritual practice.

The Marseilles Tarot is a classic tarot deck from France. The structure of the seventy-eight standard tarot cards recognized today is based on the specifications of it.

It is simple and uncomplicated. Its number cards of minor arcana, like playing cards, have no character patterns, but simply draw the symbols of the deck. For example, the Four of Cups is basically four chalices, and the Four of Coins is four coins.

Although it is relatively simple, there are still many scholars interested in its study, such as the famous psychologist C.G. Jung who believes that it contains the archetype of the human mind. In addition, Marseilles is arguably more common than poker in France, and it is used to play card games instead of pokers.

This system was invented by Madame Lenormand, who was a born diviner. She is best known for predicting Napoleon’s accession to the throne and the claim of Napoleon’s wife, Josephine, to the throne.

Since then, she has become a favorite of the court as Napoleon’s royal soothsayer. If each of Waite’s Tarot cards provides a detailed and philosophical view of a situation, Lenormand’s, on the contrary, refers to a specific event or person in a single card, giving the seeker a simple and intuitive result.

Compared to these classic tarot cards mentioned above, modern popular tarot cards are more rich in elements and have no recognized specific classification. If, for example, you are a very personalized diviner, there is nothing wrong with whatever tarot cards you choose, but rather they can become distinctive personality labels. For example:

Most of these cards are custom tarot cards with individualized character images, colors and patterns, but basically follow the rules of the four classic tarot systems mentioned above. Because of the diversity of custom tarot card faces, it may be difficult for novices to understand and describe the picture, so it is recommended for advanced readers or masters.

Main Purpose Behind the Use of Tarot Cards

Tarot cards are believed to assist individuals in matters of their present, past, or even future events by offering them guidance and support. This way, people can comprehend their current, past, or future life events in a better way. Some people even take tarot reading as a soul-touching journey so that they can evaluate the purpose of their lives.

Now, let us come to an important question, how do tarot cards attract clients for contemporary psychics? Psychics use tarot cards to help their clients connect with their present, past, or future events through story-telling. That being said, many people prefer tarot card readings over no-tool readings as this enables them to reflect and review their cards independently.

Although the main purpose behind the origin of tarot cards was to encourage recreational activities and fun games, presently, they are widely being used for meditation and divination purposes. Having said that, we can find never-ending types of tarot cards nowadays, each of which has its own specific characteristics and value.