For people who are new to playing cards, or who only occasionally play poker, they may only recognize the traditional Bicycle or Bee playing cards.

However, different types of poker are a colorful and amazingly vast world! They come in a wide variety of varieties and designs that can cater to more than just entertainment, magic, flower cutting, collecting, and more.

Therefore, this article will introduce you to 10 different playing card deck. Hopefully, you will be able to learn something after reading it, pique your interest in poker even more, and take the initiative to explore the endless fascination in the world of playing cards. When card lovers discuss a “standard deck,” they usually have in mind a deck with a classic design. Over time, the court cards and the form and design of the pips and indices have both progressed toward being standardized.

Although the backs of the cards can be different, and both the ace of the spades and the jokers can be personalized, the majority of a standard deck will typically look the same.

With the possibility of a few minute differences, like the colors utilized for the court cards, the faces of the cards often appear precisely as you would anticipate seeing them in a standard deck designed in the Bicycle style.

Poker game players prefer reasonably conventional decks. It is acceptable for a deck of basic playing cards to come in a tuck box that has an elegant appearance and conveys an air of complexity and style as a result of embossing and foil accents.

However, the playing cards themselves must be able to fulfill their intended purpose and be easily identifiable in order to be used in games. In most cases, the ideal tool for the job is a regular deck of playing cards, the kind that comes with indexes and suits that are easily discernible.

Most performers believe that working with a normal deck is the best option since they do not want their audience distracted by intricate artwork or difficult-to-read pips and indices.

In addition, the sleight-of-hand abilities that they have acquired will frequently make stunts seem more difficult and miraculous if the deck of playing cards that they are using seems to be conventional in every regard.

This is because the sleight of hand skills allow them to manipulate the cards in a way that is invisible to the naked eye. We may thus anticipate that conventional decks will continue to be attractive for card games and card magic, despite the popularity achieved with personalized playing cards. 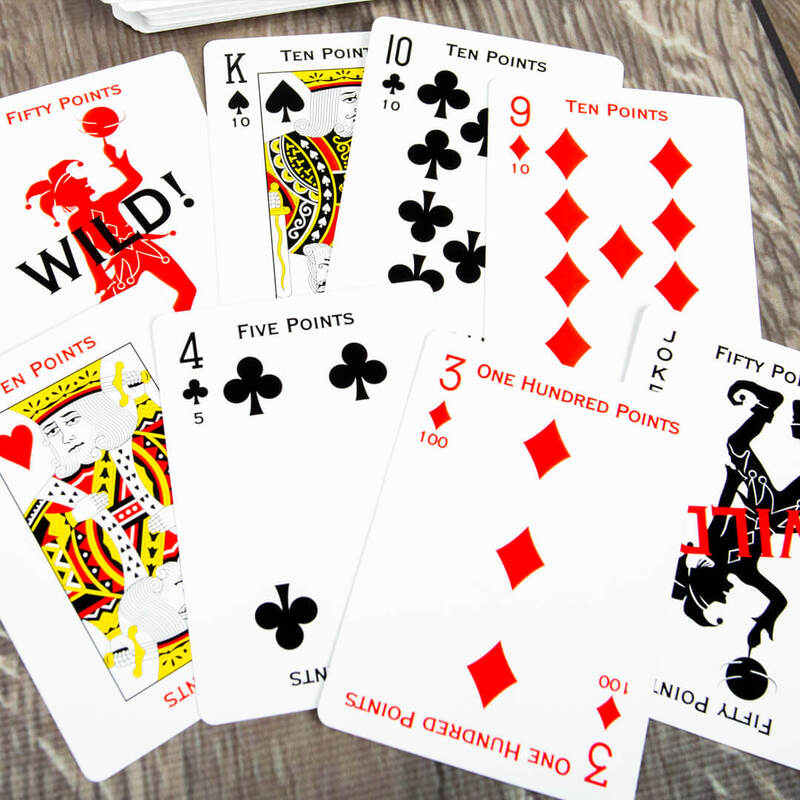 Many popular card games can be played using a conventional deck of playing cards; however, some standard decks have been modified to make them more suitable for play.

In most instances, this is little more than assigning point values to individual cards. A prime illustration of this would be the card game Canasta, which rose to prominence in the 1950s. Canasta card sets often include two decks, and the point totals on the point-scoring cards are written right to make the game more user-friendly.

Alternatively, in the card game Euchre, players don’t need almost a whole deck to take tricks. Usually, you’ll find enough cards for two games of Euchre in a standard deck, plus some extras that can be used for scoring.

Wizard is another highly popular trick-taking game. It is a regular deck with some modest adjustments to include specialized Wizard and Jester cards. These cards are what set Wizard apart from other trick-taking games.

On the other hand, the traditional card game Pinochle needs a specially constructed deck since it uses two copies of each card from 9 through Ace in each suit, resulting in 48 cards in the deck.

These are also available on their own, although given the unconventional make-up of the cards, they cannot be considered a regular deck of playing cards anymore. Card flourishing has been in use for some time, and performers have been using it for a long time. Cardistry, on the other hand, has evolved an autonomous life alongside and apart from card magic over the last decade, and it is quickly establishing its credibility as an art form in its own right.

Cardistry is a card juggling style performed for an audience. It can be roughly characterized as the performance art of card juggling. Cardistry often includes an individual making visually attractive cuts, twirls, spins, and other moves with a deck of cards.

Cardistry is seeing explosive growth, particularly among younger people, due largely to the proliferation of social media platforms and the ease with which anyone can now upload and distribute films online.

Cardistry, on the other hand, has led to the development of a unique deck made specifically for the art. Because of the emphasis on appearance, a deck with vibrant colors and eye-catching patterns will provide the best results while cardistry is performed. Since that, decks tailored and built expressly for cardistry were eventually developed.

Due to the widespread popularity of cardistry, decks of playing cards that focus only on visual aesthetics rather than a practical utility for games and card magic quickly found a willing consumer base. Although some cardistry decks are designed to be multipurpose (for both games and magic), their main function is to be aesthetically pleasing.

Usually, a cardistry deck would need the absolute greatest level in terms of quality and performance. It will contain a design and pattern that appears amazing while the cards are being handled.

This is because cardistry relies heavily on visual illusion. There are also cardistry decks where both sides of every card are the same, eliminating the need for pips and indices. Card magicians utilize these cards for card magic, thus creating specific Gaff decks. Sometimes these may be a deck containing individual gaff cards meant to be used independently, such as a double backer or blank card.

Other times, though, they will be more sophisticated than that. A gaff deck can be completely made up of gaffed cards, also frequently referred to as “trick decks”. These decks allow you to do things you wouldn’t be able to accomplish with a standard deck. Collectors who are serious about their profession will often be cautious to differentiate between the terms “antique” and “vintage.”

The term “antique” can refer to anything over a hundred years old. However, the word “vintage” is far more versatile. It can be used to refer to anything that is from a previous generation or historical period.

A deck considered to be vintage originates from a time period that has since passed. Playing cards are a product designed to be utilized rather than maintained; as a result, the vast majority of pre-World War II decks have been destroyed or are in very poor condition when they are discovered nowadays.

Since these decks are so rare and valuable, the marketplace for them commands prices much beyond what the normal card collector would spend.

On the other hand, only because a deck has a vintage aesthetic does not imply that it is of a certain age. Some beautiful and eye-catching decks give off the impression of being quite worn and outdated. However, they are composed of brand-new playing cards of very good quality.

This could be accomplished by utilizing a graphic design that gives the cards the appearance of being damaged on purpose or having an antique appearance. Sometimes, these are precise reproductions of well-known decks from the past.

On other occasions, however, the decks have been digitally manipulated to give the impression of having been used for a long time.

This was accomplished by using a creative license to produce an item that only gives the impression of having been used for a long time. In any instance, many of these contemporary decks are aptly referred to as “vintage decks.”

They have the appearance that they have been transported into the current day directly from an earlier era. However, they are still high-quality items that feel amazing and perform well.