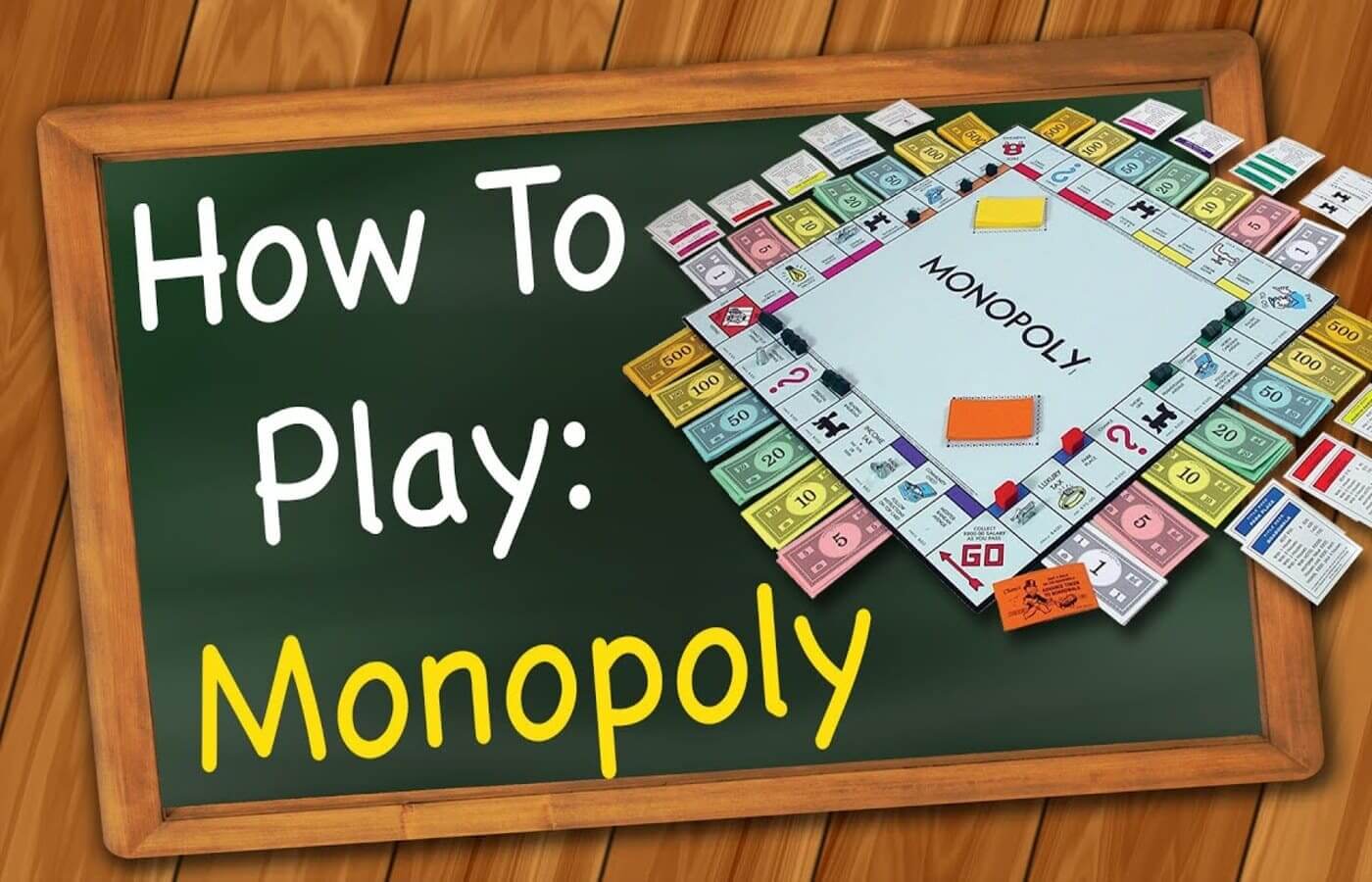 The Forgotten History Of The Monopoly Board Game

Monopoly is a board game that is present in almost every house and since the nineteenth-century hundreds and thousands of people have played monopoly, but have you ever wondered about the history and the truth behind it?

Let us do a time travel and go back to the late 90’s century when monopoly board game came into being. Initially, it wasn’t called monopoly at all, even the man we knew Charles Darrow isn’t the real creator of the game.

In reality, the inventor of monopoly was a lady named Elizabeth Magie who was born in 1886 in Illinois, was a feminist, and was highly moved by Henry George’s conviction.

She had seen the gilded age of America which seemed like a golden era, but in reality, was an era of corruption, thieves and the fat cats were only getting wealthier.

Magie came up with a board game and patented it, the game was called “The Landlords Game”. This game was inspired by Henry George’s ideas.

Henry George was a political economist and journalist. He gave the idea of imposing taxes on particular properties to make the economy more stable. Back to the story, this game had mainly two aspects:

The first one was called Anti-monopolists, whenever someone buys a property they will get a fair cut of their share. The main intuition of this was to show how people could benefit from the taxes paid by the buyer, as a result, everyone could get benefit from it.

The second aspect was called Monopolist or winner takes all, which we are seeing nowadays to simply put it, the wealthiest among the players will win either by buying or by bankrupting other players.

Magie had the vision to break the divided pyramid in which the higher-ups will benefit from the people at the bottom.  She started selling this board game from her home, as this game wasn’t sold in a box so mainly it was handed over from one friend to the other. 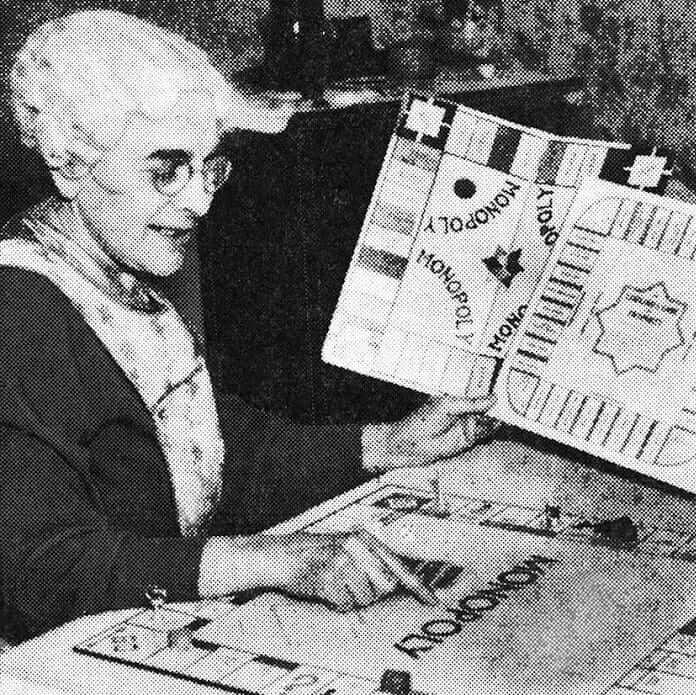 But contradicting Magie’s vision people became more interested in the second set of rules, the monopolists which mainly promote land grabbing and greed.

As the game gained popularity and was widespread people started referring to it as the “Monopoly Board game”.

Now let’s meet Charles Darrow, Charles was an unemployed contractor born in Philadelphia. He first played the game at a formal get-together in 1935. He became obsessed with this game and later on came up with his version of the game.

Then he sold the rights to Parker Brothers for a hefty amount of money along with royalty for a lifetime. Who knew a common game could be a fortune for Charles, long story short, Charles became a millionaire and enjoyed the royalties throughout his life.

On the other hand, the lady Elizabeth Magie was approached by the Parker brothers, she only got 500$ for her patent for “The landlord’s game” and two other games she created.

Parker brothers got a heavenly fortune out of this game and their company became a multi-millionaire company, along with Charles Darrow who got all the credit, while Magie was cut out from the origin story of monopoly.

So, the next time you buy Connecticut Avenue, pay rent at a property, or even if get caught up in jail, never forget the lady behind monopoly.

To understand Monopoly the easiest guide for beginners is to first apprehend the general concepts and gameplay, and then they should get into more of the details of the game. The game generally needs 2~8 players.

Setup of Monopoly board game

The board is arranged by piling the chance cards and community chest cards in the designated spaces on the board. Each participant chooses a token to advance around the board. Each token starts on the “Go” space.

One player is nominated as the banker, the banker has certain duties from collecting tax money to buying and selling off properties, it is his job to keep everything in check.

The objective of the game is to become the wealthiest player in the game by buying, renting, and selling properties.

Each player rolls a pair of dice on their turn and then moves their token to the space with the same value as the roll and takes certain actions based on the property they land on.

If a player lands on a chance space, a card will be drawn from the chance card stack and the instructions above will be carried out.

All spaces represent a property when landed on the player has the option to purchase the property from the bank, a property’s price is listed on the bottom of the space.

And if a player lands on a chance slot, he or she will then draw a chance card; the action on the chance card is then carried out, and the card is put back at the bottom of the stack.

A player could also land on a tax slot and will have to pay the indicated tax. If a player lands on a jail slot, they will not be penalized as they are just visiting. 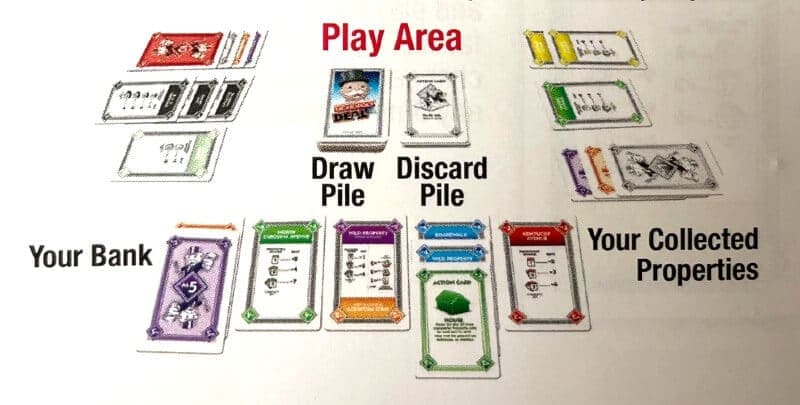 When a player is imprisoned, they have three options for escaping:

Rolling the same number on both dice; playing a get-out-of-jail-free card which can either be obtained from two card piles or bought a card from another player for a predetermined price.

Thirdly, paying $50 to the bank before rolling, which will cause them to advance however many spaces they roll. Rent increases by two times for a player if they own every property of the same shade.

For example: when a player possesses every red property and another player lands on Kentucky Avenue the rent would be 36$.

Also, when a player owns all the properties of the same color houses can be bought for the properties, and the player that possesses every red property can put a house on Indiana Avenue for 150$.

When a house is on a property the rent increases according to the card, houses must be split as evenly as possible among the properties.

And when all the properties in a color have four houses, a hotel can be acquired. However, every property must have at least one house before a second one is added. This again then raises the rent for the other players that land on this property.

The bank receives the money spent on homes and hotels. If the bank runs out of homes and hotels to sell, however, all players will have to wait until a home or hotel is sold back to the bank.

When necessary, a player can return hotels and homes to the bank for 50% of what they were originally purchased for.

If there is no house or hotel on a property a player can sell the property to another player for an agreed-upon amount, a property with no houses or hotels on it can be mortgaged back to the bank the mortgaged amount received back from the bank is on the back of the properties card.

No rent is collected when a player lands on a property that is mortgaged; instead, the mortgaged is removed when the pledge amount is restored to the bank plus 10%.

Once a player owes more money than they can afford to pay and has no properties left to sell, they are declared bankrupt and are no longer in the game. The last player standing is the winner, and that pretty much summarizes how to play monopoly. 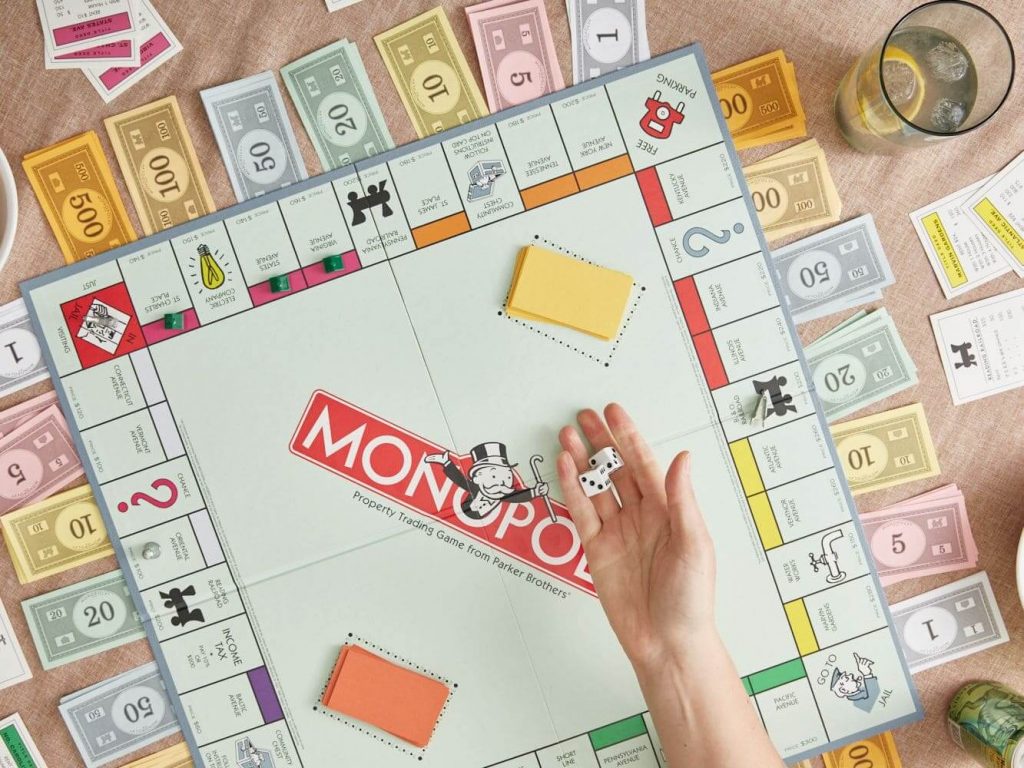 Monopoly is legendary it’s the board game capable of bringing family and friends closer together and also causing them to squabble over whose turn it is and who’s going to be the banker but if you’re in the market for a unique version of the game which monopoly game board should you buy?

Well not to worry we’ve got you covered, after gathering data from numerous websites and consumer reviews following are the five recommended products, and just to be clear the staple classic old monopoly game and other junior versions of the game are excluded because everyone has one of those right. 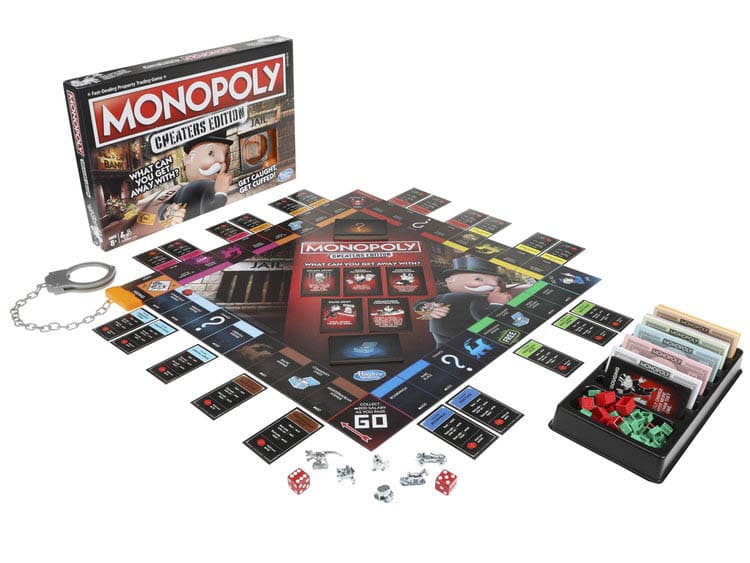 Nobody likes a cheater that is of course unless you are playing this version of monopoly, the premise of this version is pretty much the same as the original monopoly board game.

However, thanks to things like cheat cards players are encouraged to bend the rules whenever they please the only rule being don’t get caught. This just makes the game quite amusing. 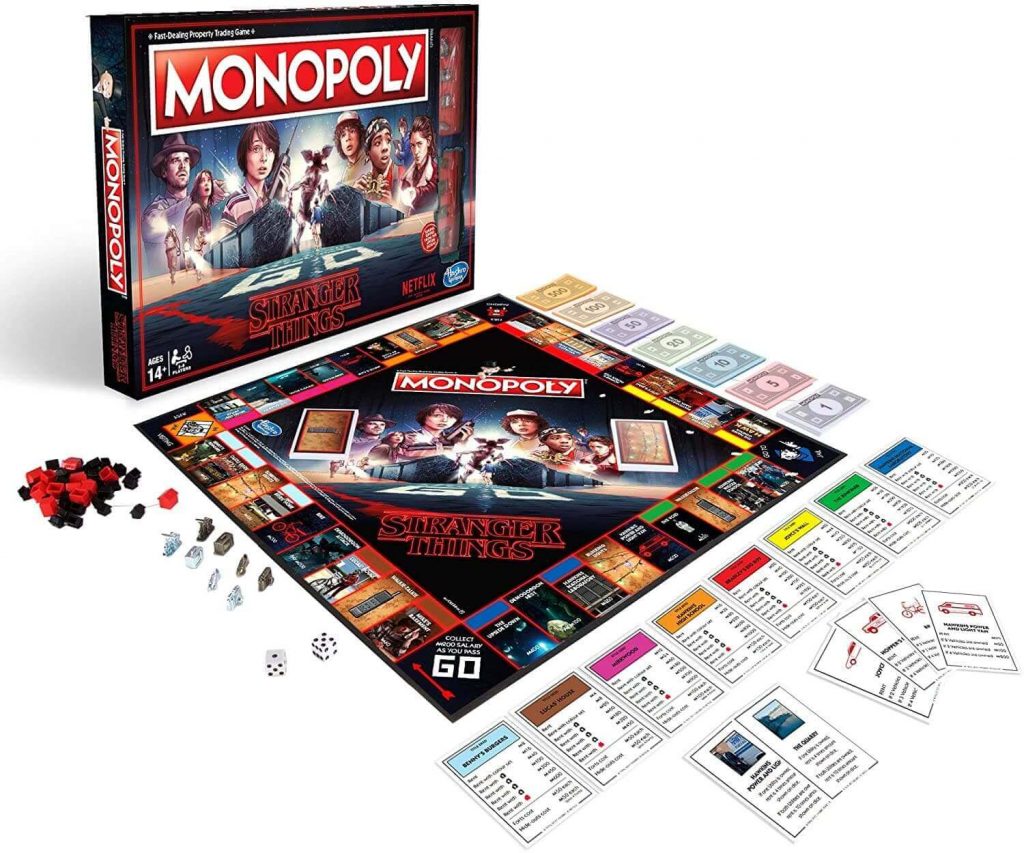 Just as with the Netflix series a few weird things are going on with this edition of monopoly like glow-in-the-dark dice, upside-down cards, mind-flayer encounters, and a secret Hawkins lab envelope.

This edition feature elements of season 1, 2, and 3 with a whole lot of properties like Eleven’s room, Mike’s basement, and many more that can be purchased. 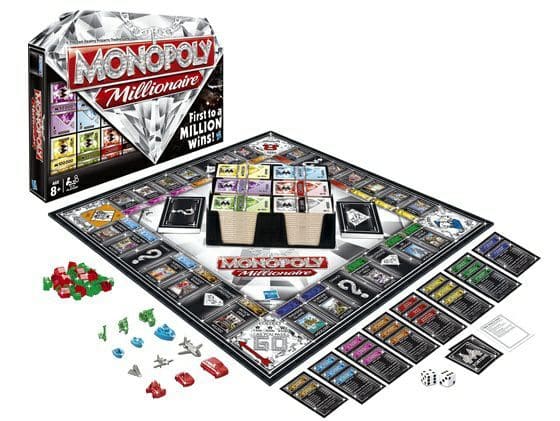 If you want a more highbrow version of the game then this millionaire edition offers a few unique twists and turns that will make you a million dollars before anyone else.

This up to four-player version offers a lot of privileges like millionaire lifestyle cards and the ability to upgrade your player token to gain more salary. 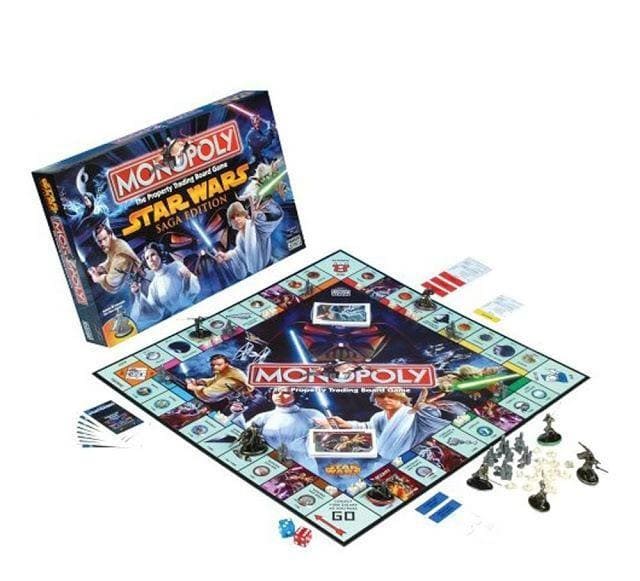 This ultimate Star Wars Monopoly, from a galaxy far, far away, combines elements from all nine films into one game.

Figures from each film are covered in this Saga version, such as property being replaced by planets and robots, while houses and hotels become tie fighters and X-wing fighters. All these special features make this version highly interactive and exciting. 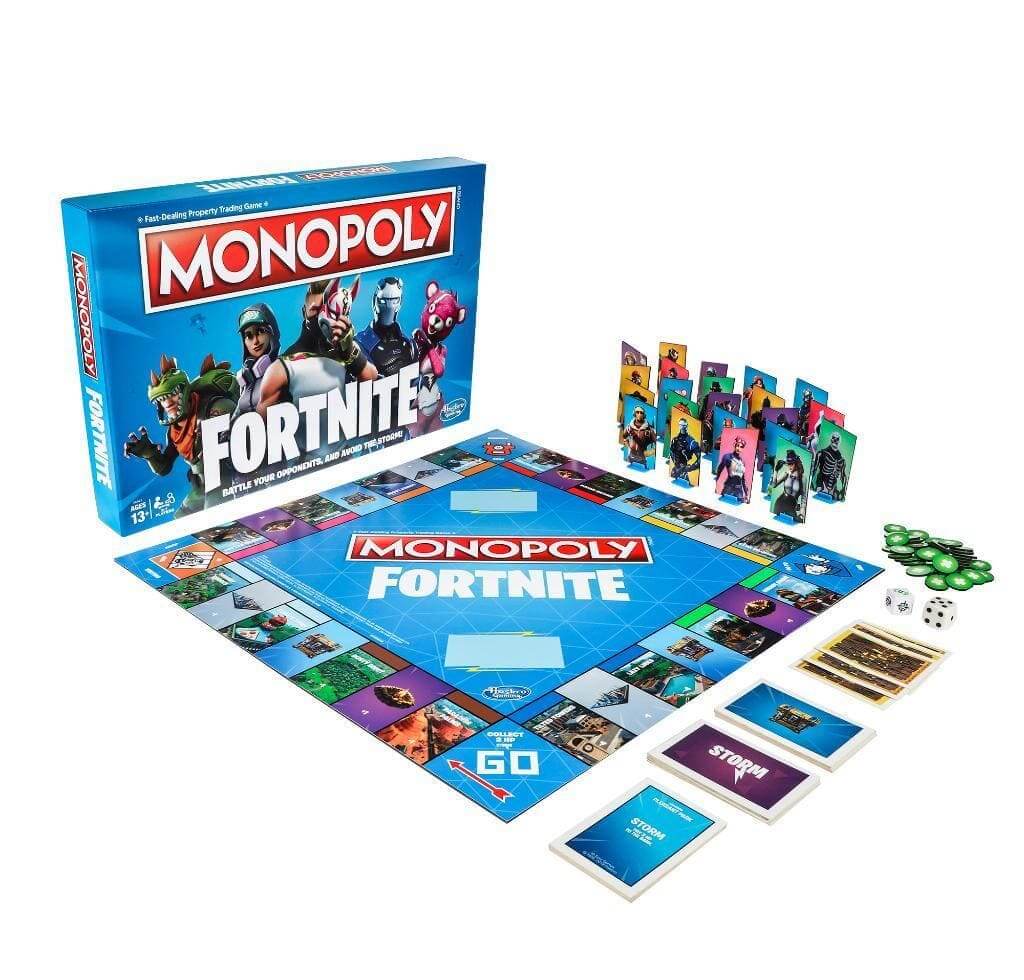 If you have ever played Fortnite you’ll know it’s a fast-paced chaotic affair with zany characters. The monopoly version is pretty much the same. In this game, health points have replaced community chests as our currency.

At the same time, you have loot boxes to slow down other players by building walls, or releasing storms to damage their HP each time you pass through Go.

What’s more, here are a few other great monopoly additions that might catch your attention:

So which version of monopoly should you choose well? If you’re a fan of a particular TV show or movie you won’t be disappointed with their respective themed version.

If you’re looking for a different version of the classic monopoly setup, the millionaire version would be great as it has solely unique features that enhance the overall monopoly gameplay. 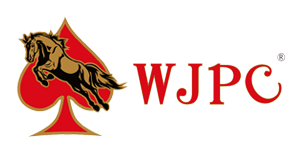